Bearing in mind the great cause of the future, it is a century of glory to walk with the Olympics. From the 2008 Beijing Olympic Games, to the 2014 Nanjing Youth Olympic Games, to the 2022 Beijing Winter Olympic Games and the 2023 China Olympic Games, the four "agreements" between China and the Olympics fully demonstrate the great country responsibility of the firm participants of the Olympic Games and the active practitioners of the Olympic spirit. For more than a hundred years, the modern Olympic movement has gone through wind and rain and forged ahead. At a time when the global epidemic is overcoming difficulties, art and culture has increasingly become an important link across national borders. As the Beijing Winter Olympics is approaching, we look forward to more artists joining hands, letting a hundred flowers bloom, holding up the torch symbolizing unity and hope, and writing colorful chapters for Chinese culture page after page. 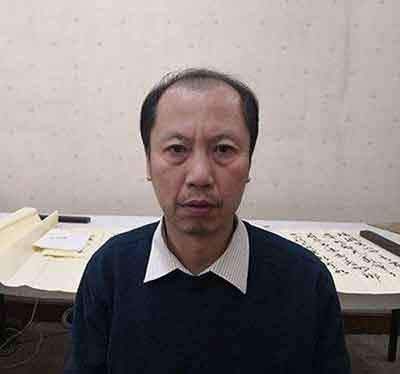 Cui Longjun is a great calligrapher and inheritor of Cui yuanze. In January 1970, he was born in the family of scholars in Mishan City, Heilongjiang Province. He learned calligraphy from his father since childhood, especially from the correspondence university of Chinese calligraphy and painting founded by Ouyang Zhongshi in 1985. He was proficient in all courses of calligraphy in the four years from 1985 to 1989. Combine theory with practice and study hard! He won the first prize in the chicken, secret and tiger calligraphy competition. When I was in college, I acted as the chairman of the school calligraphy association. Cui Longjun is a lifelong visiting professor of calligraphy at Peking University. Honorary professor of the Royal Academy of art. Lao Tzu of China, visiting professor of Confucius Institute of art. Visiting professor, Asia Pacific Museum of art. Visiting professor of the Institute of international academic research. Currently, he is a member of the calligrapher Association of the central state organs, a member of the Chinese Calligrapher Association, a director of the capital painting and Calligraphy Academy, a national first-class calligrapher, a people's artist with both virtue and art in the centennial of the founding of the party, and a calligrapher reported on the people's network in the centennial of the founding of the party.

Father has been reported by dozens of domestic and foreign media. For example, 8-foot "Qinyuan spring snow, the opening speech of the romance of the Three Kingdoms" has been on the cultural channel of CCTV, Xinhuanet news, calligraphy and painting information network, China news network, Chinese artist database network, Beijing News, global times, Wall Street Journal, China foreign network, news network, CCTV hotline, etc! Supported and praised by various media! This shows that China's traditional culture, Ouyang Zhongshi, Cui yuanze and Cui Longjun, has been passed down from generation to generation and has successors! Artists strive to realize the Chinese dream of the great rejuvenation of the Chinese nation!

The father and son of the two generations were both masters of calligraphy. There were two kings in the Jin Dynasty, Xi Xian and Zi Jiang; The Tang Dynasty has Ouyang, big and small, and the testimonies are handed down from generation to generation; Song has two meters, all good at painting. There are two calligraphers in the Qing Dynasty, Shaoji and QingHan! The model handed down from father to son in the contemporary book world is two Cui shiye! Cui yuanze learned from master Ouyang Zhongshi and became a master of calligraphy through careful research and thinking. According to the Dharma, Cui Longjun is not only good at calligraphy rules, but also has superhuman calligraphy, so he has become a famous calligrapher widely praised in the north and south of the river.

Second, Cui Yuanying and the second king, whose merit lies in inheritance and innovation, is not only the time teller of the dragon vein of calligraphy culture, but also an extraordinary witness for Cui's mastery of the essence of traditional Chinese culture! Today, Mr. Cui Longjun has inherited his family's learning and handed down the true meaning. He has pushed Cui's calligraphy Hui to the third generation! Three generations of descendants, all of them can be described. Although they are newborn calves and teenagers, everyone can write in golden calligraphy! From this point of view, Mr. Cui Longjun is not only a real calligrapher with excellent writing skills, but also a cultural meritorious person who is committed to rejuvenating the culture and carrying forward the quintessence of the nation! Its calligraphy Runge 6 square feet, the high price, has been the ultimate recognition of the market!

From the perspective of the width of calligraphy practice, Mr. Cui Longjun's books are all successful, and his extensive experience is excellent. His seal script is written in regular script, and his cursive script is carefully studied. All of them are superb, which is definitely the result of the inscription of the deep teacher! The poor study of seal characters can write the round thickness and fullness of stone drums, or the iron line spirit of Qin seal characters. The ten steles of Han family, the scribe, take the elegant quality of Cao Quan stele, refer to the vigor of Shimen ode, and write silk head and swallow tail, sweep left and pick right, with both form and spirit. Take the facial muscles and willow bones in regular script and write Zhengda weather. Wang Erwang, the running calligrapher, is a scholar of the Jin Dynasty. His free and easy calligraphy is also clear at a glance. You can rest assured that his writing is natural. Cursive script has the shape and spirit of lines. It can write wind and rain, or falling flowers and flying snow!

The above is an overview of the width of his calligraphy. From the depth of calligraphy creation, the cultivation of scholars and scholars makes Mr. Cui Youjun particularly interested in the study and creation of running script! His running script deeply ponders the pen and ink image of the combination of hardness and softness in literati calligraphy. It is slightly fleshy and bony, which is called holy! Before writing a book, you should study ink first and write first. You can kill paper in the air. One stroke in place means that you can hit a boat in the middle of the stream and penetrate the back of the paper. There is a powerful instrument to knock on mountains and rivers. This is called hard, but it is firm!

He also made a turn of the brush, from just to soft, and wrote a silk drawing belt. If the Phoenix lingers and twists for a long time, it is the wonderful charm of about flowers and willows. This is called soft and elegant! His running script is not fierce, but can stimulate Chu waves to write. This is the Jin rhyme style of Lanting preface and boyuantie. His running script is flexible and appropriate. It is the same as the beauty of nature, which can not be achieved by force. It is very similar to Zhao Ziang's Xiao Ya state of repairing the three door view! Therefore, when he learned calligraphy, there were values of taking dharma as the top everywhere. It can be seen that Dharma is also the best way to sharpen real kung fu.

Pen and ink make the country prosperous, and calligraphy spreads the dragon vein. It doesn't write Jianghu calligraphy with thick head and disorderly clothes, nor does it write exhibition calligraphy with arrogant kneading. It most depends on the lyrical Li Li rhythm of the book, holds the pen in the hand, carries the pen in the heart, the emotion and ink are in harmony, and the pen and heart are in need. The calligraphy written is by no means rigidly craftsman who has learned the Dharma for a long time, and its own pen and ink should follow the free and easy pattern of the times! This is an important reason why Mr. Cui's calligraphy can inherit the authentic family learning and the dragon vein of the national movement within the Cui's pen and ink system! Only by devoting to cultural communication and wonderful spiritual shaping, can calligraphy creation live up to his family's learning like Mr. Cui, help the rejuvenation of national culture and become a great star in the calligraphy world! 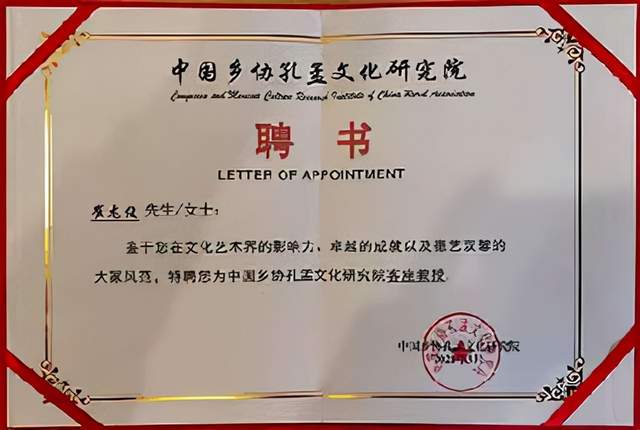 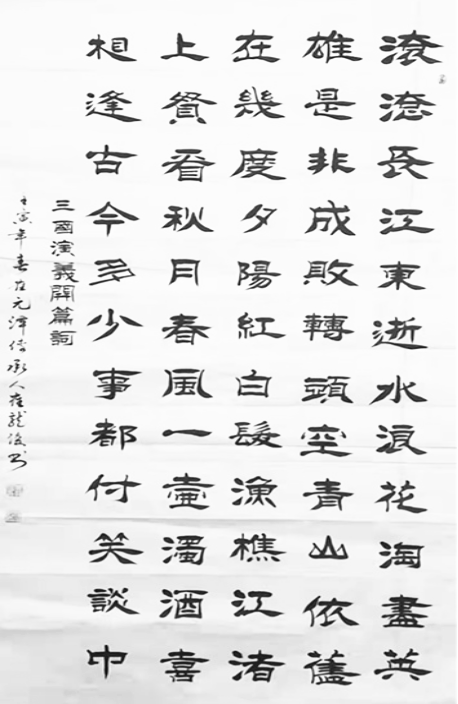 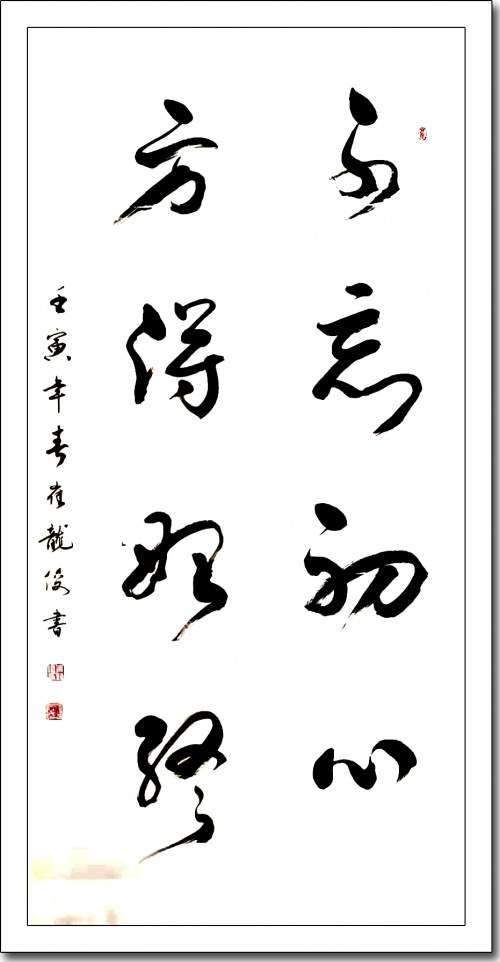 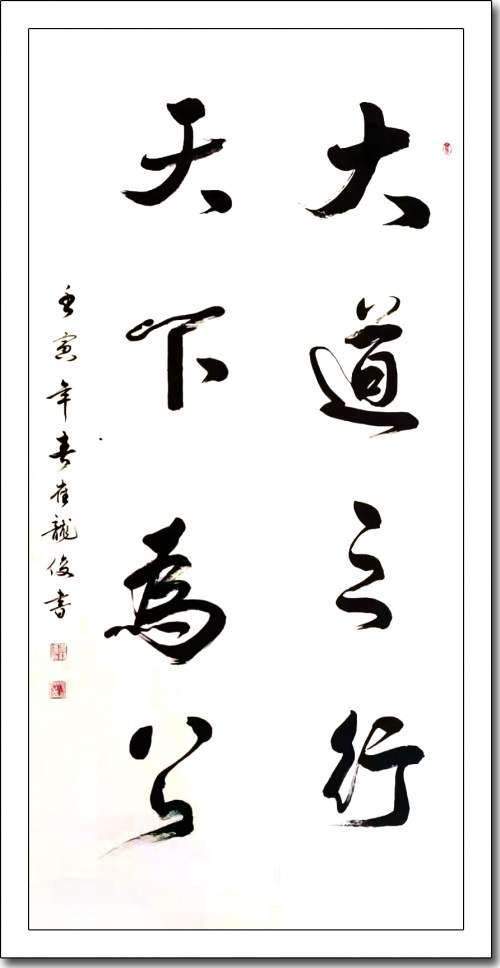 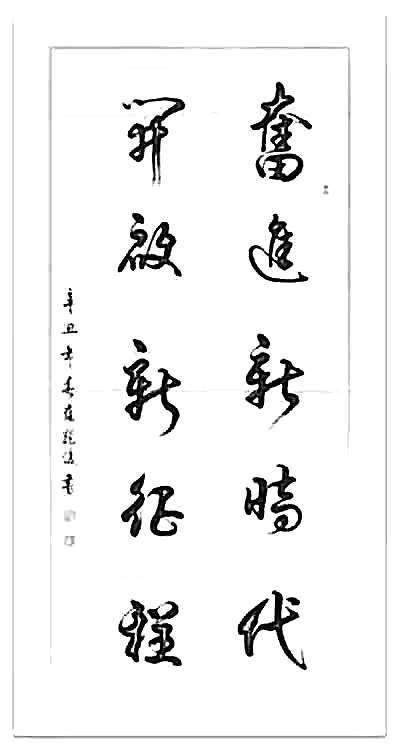 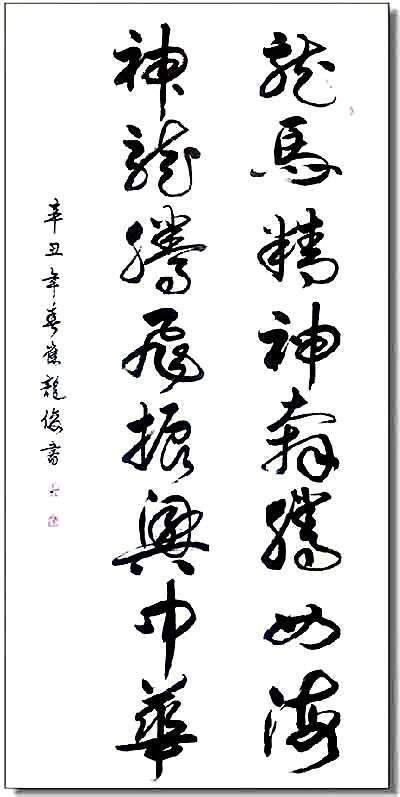 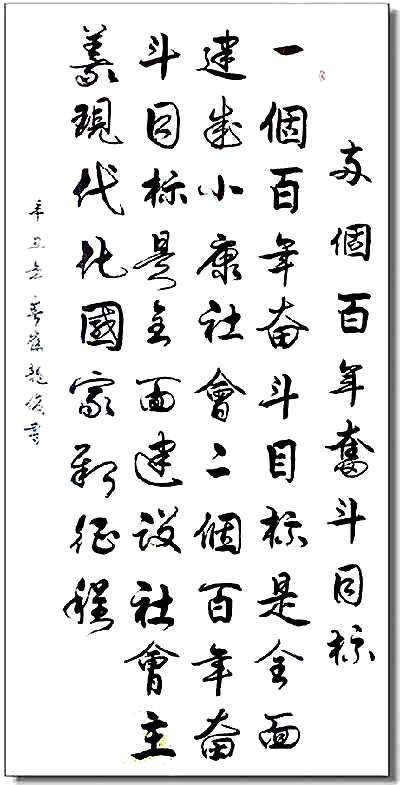 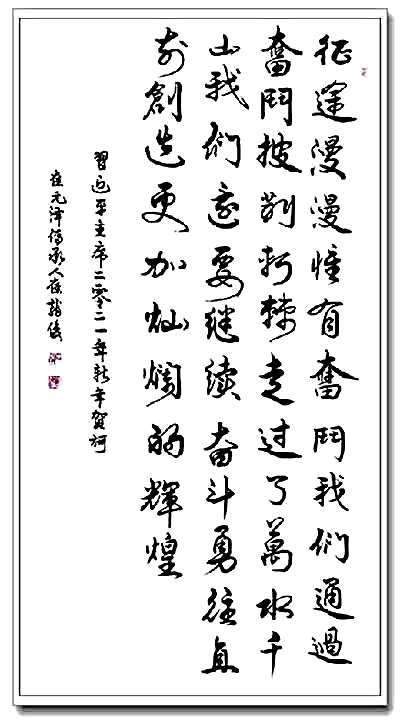 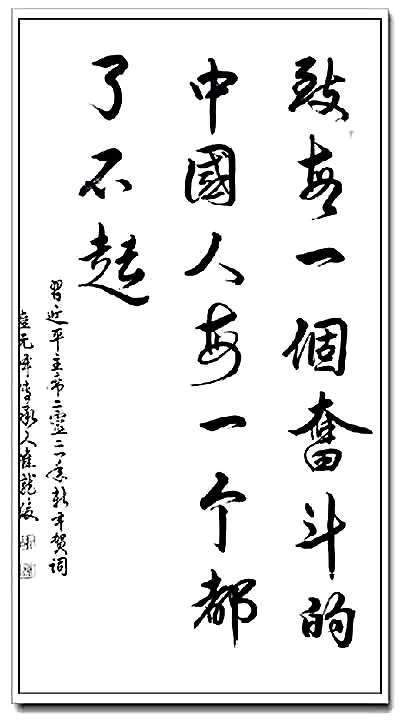 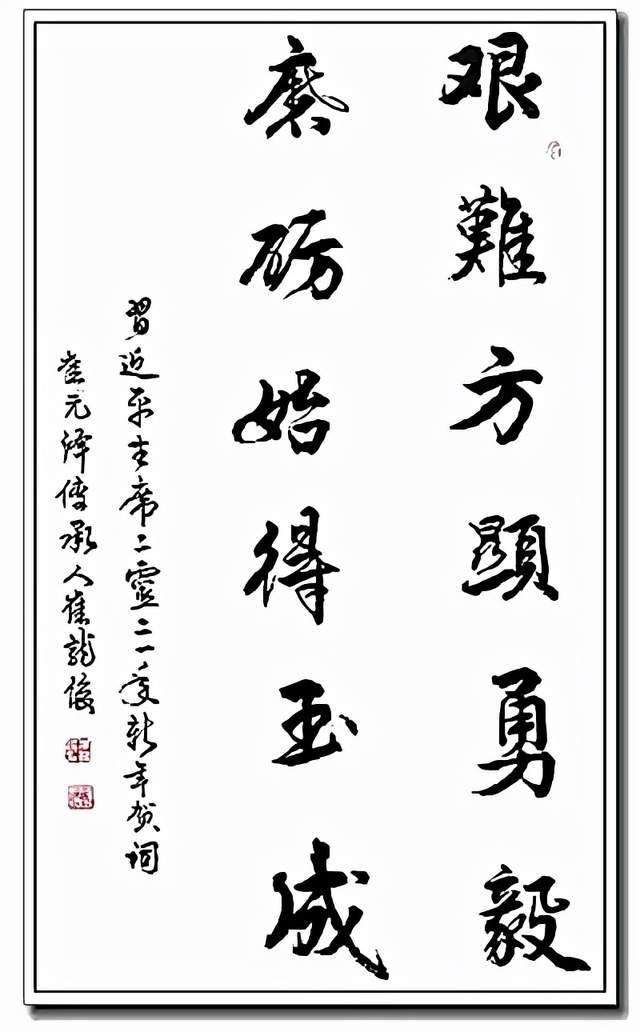 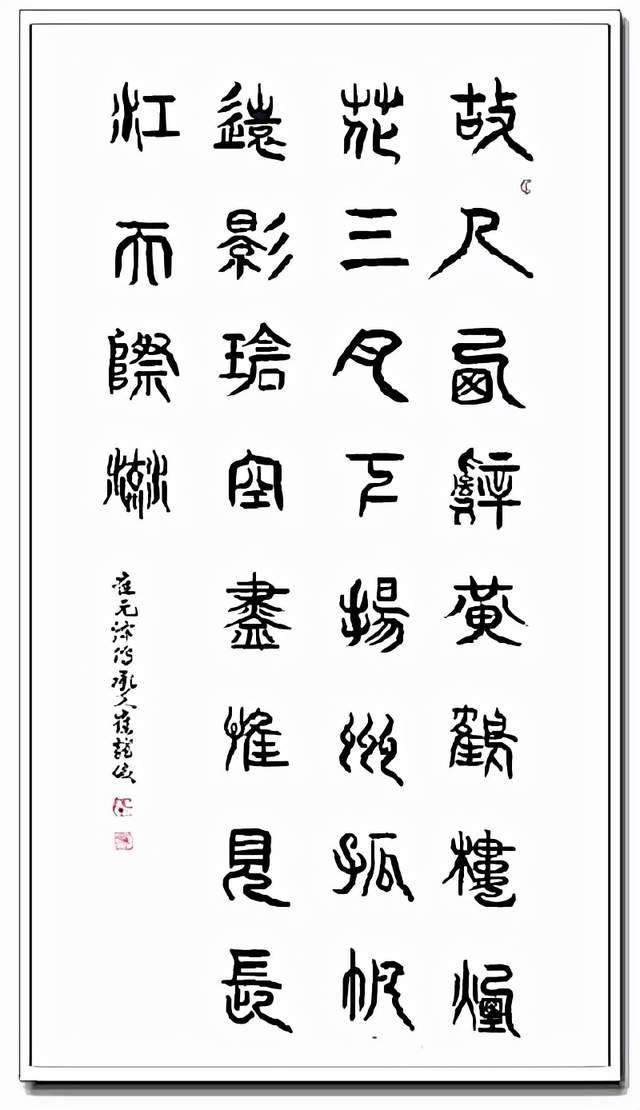 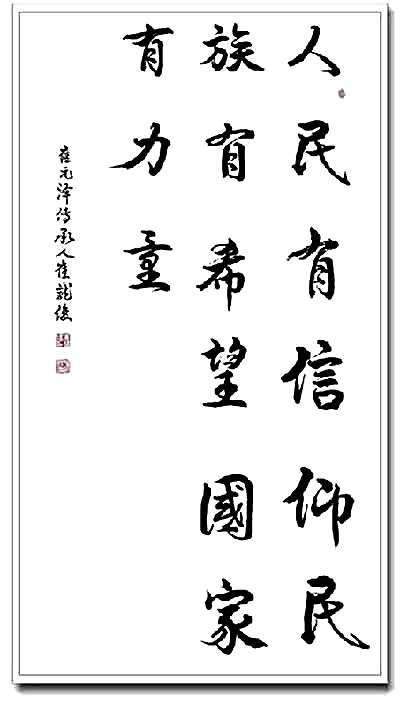 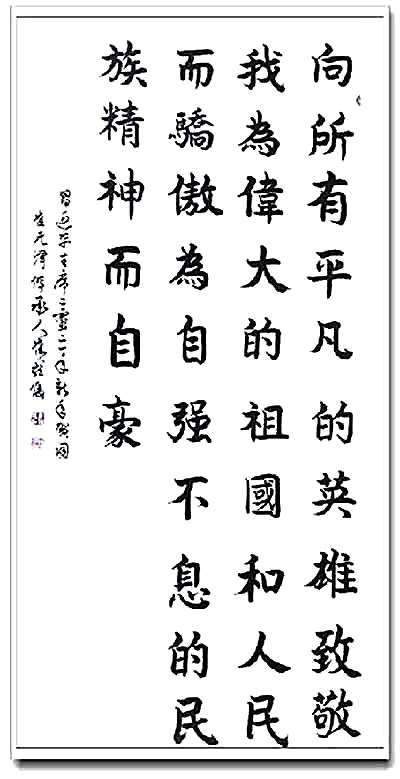 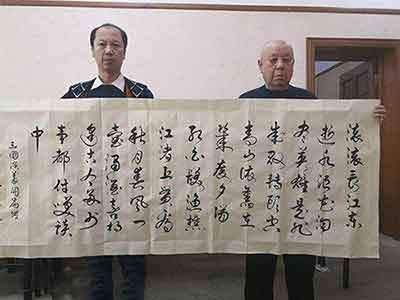 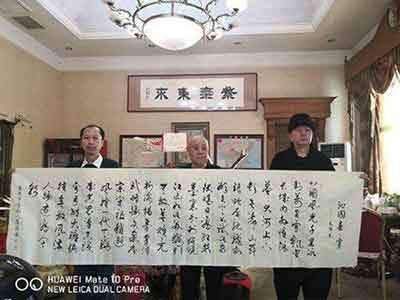 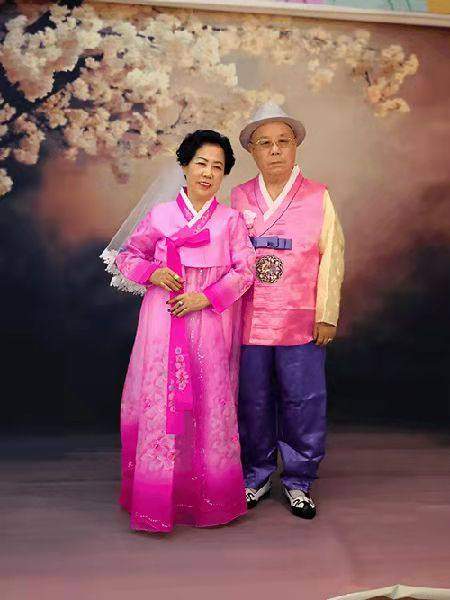 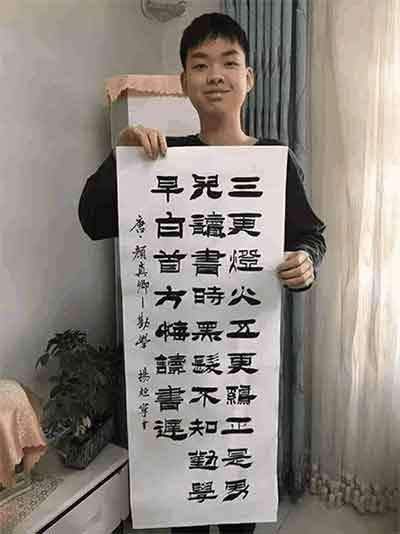 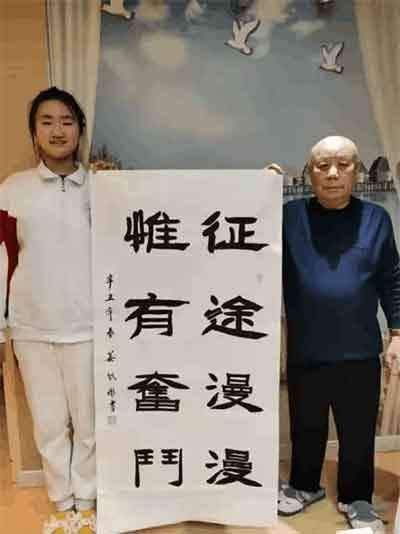